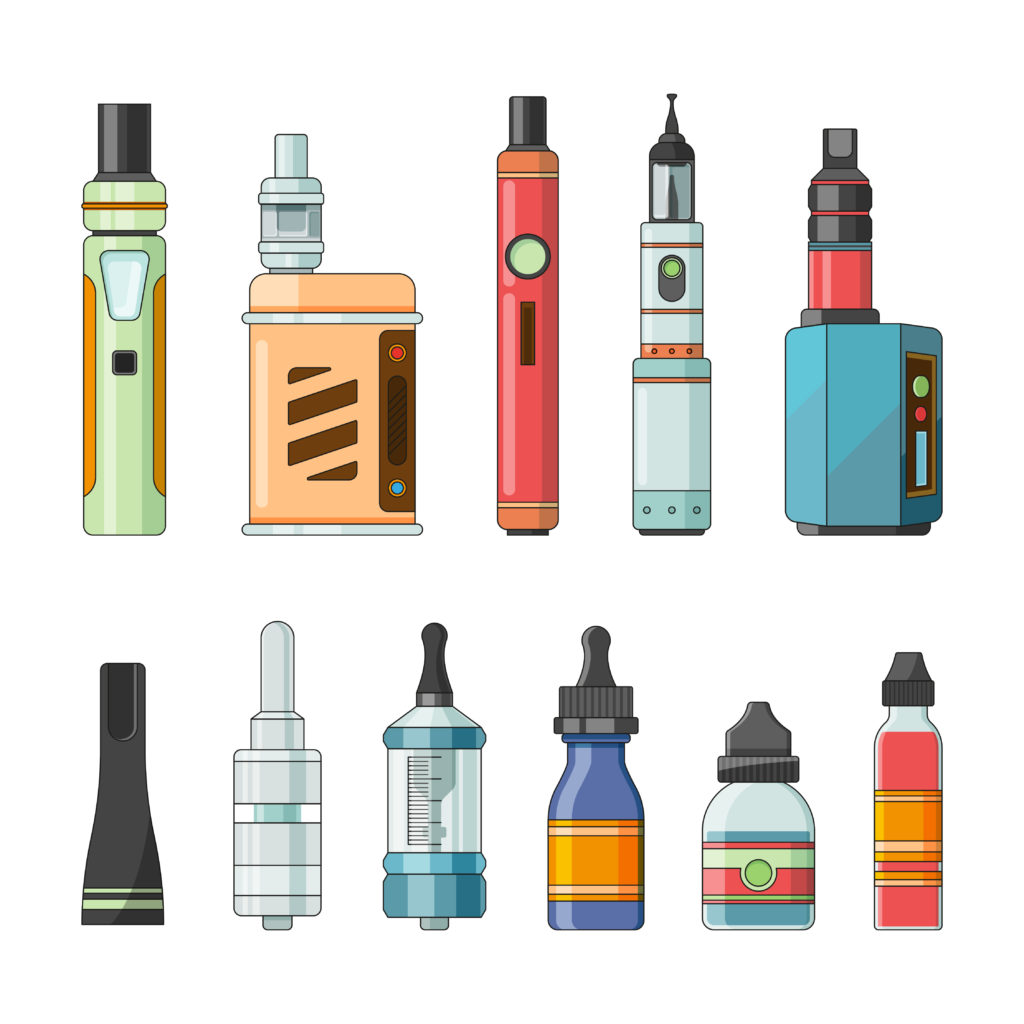 E-liquids are sometimes referred as vape juice or e-juices. However, there are many other terms such as vape fluid, vaping juice or e-fluid. Basically, e-liquids are made of two main e-liquid ingredients: propylene glycol and vegetable glycerin.

The composition of the e-liquids can vary depending on the country and its regulations.  Therefore, there are many e-liquid recipes, but mostly all, contain both propylene glycol and vegetable glycerin.

There has been a lot of controversy about e-liquids and their ingredients. For instance, we have read many news about vaping and lung disease. However, this news doesn’t draw any conclusions about the disease and it’s mainly based on speculations and biased information.

Nonetheless, some sources state that 78% of the patients who reported respiratory issues after vaping, were vaping THC e-liquids. In other words, it was caused by black-market e-liquids.

It’s sad and infuriating how misleading and biased most of the vaping news reports are. To be exact, it’s very irresponsible to spread unnecessary fear.

Both propylene glycol and vegetable glycerin are the most common ingredients found in e-liquids.

For example, propylene glycol is a diluent used in intravenous diazepam, lorazepam, nitroglycerin among other substances.

Propylene glycol is used for so many purposes that it is illogical to consider it a pernicious e-liquid ingredient. In fact, PG and VG in e-liquids are completely safe for human use.

In vaping, propylene glycol is generally odorless, but with a slightly sweet taste.

Vegetable glycerin is a viscous liquid derived from the oils of plants such as palm, soy or coconut. Moreover, it is widely used as a sweetener in the food industry and in cosmetics because of its humectant properties. To sum up, it can be used as a humectant and as a sweetener.

Many e-liquids are intended for ex-smokers that still have a nicotine addiction. Firstly, let’s remind that nicotine is one of the most addictive substances and that’s why many smokers have many difficulties to quit this habit. In addition, nicotine has both sedative and stimulant properties.

As previously mentioned, nicotine e-liquids come in different nicotine concentrations raging from 4 mg/ml to as high as 36 mg/ml.

There are two forms of nicotine for e-liquids: freebase nicotine and nicotine salts:

On the other hand, nicotine salts aren’t as harsh as freebase nicotine. However, they come in higher nicotine concentrations than freebase nicotine, which is great for vapers who want to control and progressively reduce their nicotine intake.

Moreover, a French study has found that vaping is an effective method to quit smoking. In other words, nicotine salts help the vaper to control and manage the nicotine levels.

It’s extremely unlikely to get a nicotine overdose by just smoking or vaping. However, spilling onto the skin can lead to intoxication. In addition, smoking large amounts of tobacco can also cause serious intoxication.

Moreover, liquid nicotine could be potentially lethal if ingested. The human LD50 for nicotine is 0.5-1.0 mg/kg.

There have been cases of attempt suicides by ingesting liquid nicotine. However, death is extremely unlikely because nicotine causes nausea and vomiting.

It is important to keep nicotine products out of the reach of children.

A common flavoring for e-liquids is diacetyl. Diacetyl is used to give a buttery flavor to foods such as popcorns.

There are concerns about diacetyl and its health effects with some sources claiming it causes “popcorn lungs”. However, there are no evidence linking diacetyl to any negative health effects on lungs. Nonetheless, there are also e-liquids that don’t contain diacetyl.

There are a wide variety of e-liquid ingredients that are diacetyl-free tested. Moreover, you can find many e-liquids that contain organic flavorings and no artificial sweeteners.

Finally, the other common ingredient in e-liquids is just water. Simple water. To sum up, e-liquids usually contain: water, propylene glycol, vegetable glycerin, sweeteners and sometimes nicotine or other ingredients such as CBD.

There are no secrets in e-liquids. It’s just a combination of a few ingredients. For instance, propylene glycol provides that coarse throat hit that resembles tobacco smoking. Secondly, vegetable glycerin is the key ingredient for vapor and cloud production.

We know that recent news reports are trying to blame vaping for an unknown respiratory disease. However, all the e-liquid ingredients are perfectly safe for human consumption.

Nonetheless, it’s obvious that almost all the patients that have reported respiratory issues were vaping a black-market THC e-juice.

In conclusion, we advise you to stay away from black-market e-juices and only vape regulated and licensed e-liquids.