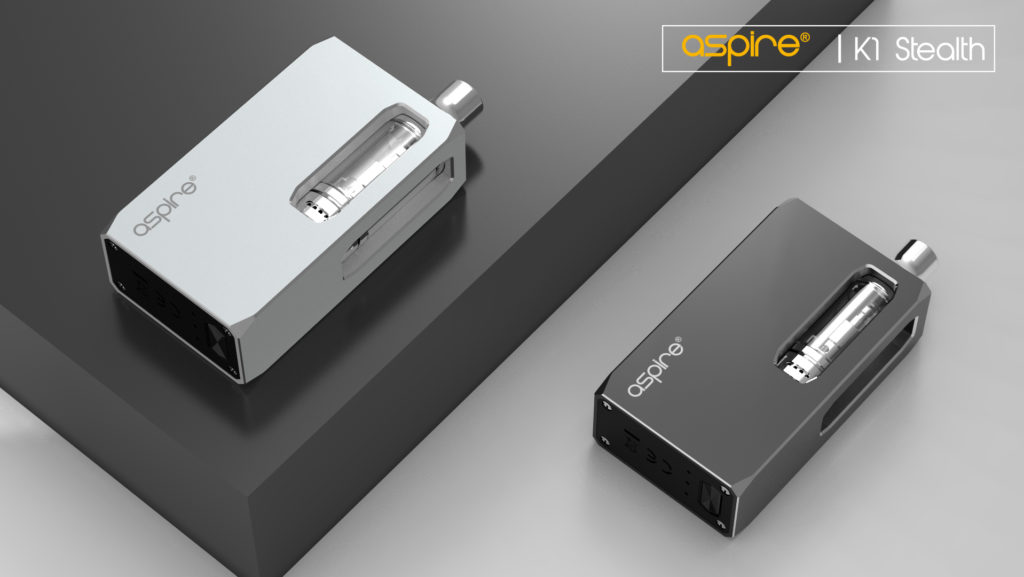 You like stealthy vaping? You’ll love this little palm sized mod from Aspire, not just another pod system, this little beauty has a tank! Yes, a tank in a stealth kit.

I had the great pleasure to be one of the first to try the newly designed ASPIRE K1 Stealth Kit and I must say, I’m loving it. Its square(ish) with slightly rounded corners but still really comfortable to hold. It’s easy to use, easy to fill, easy to change the coils, has adjustable airflow, and it even has adjustable wattage. It also comes in two versions where the ASPIRE K1 Plus tank is either2.4 ml for the standard version or 1.9ml for the TPD version.

Let’s go through each of them in turn. 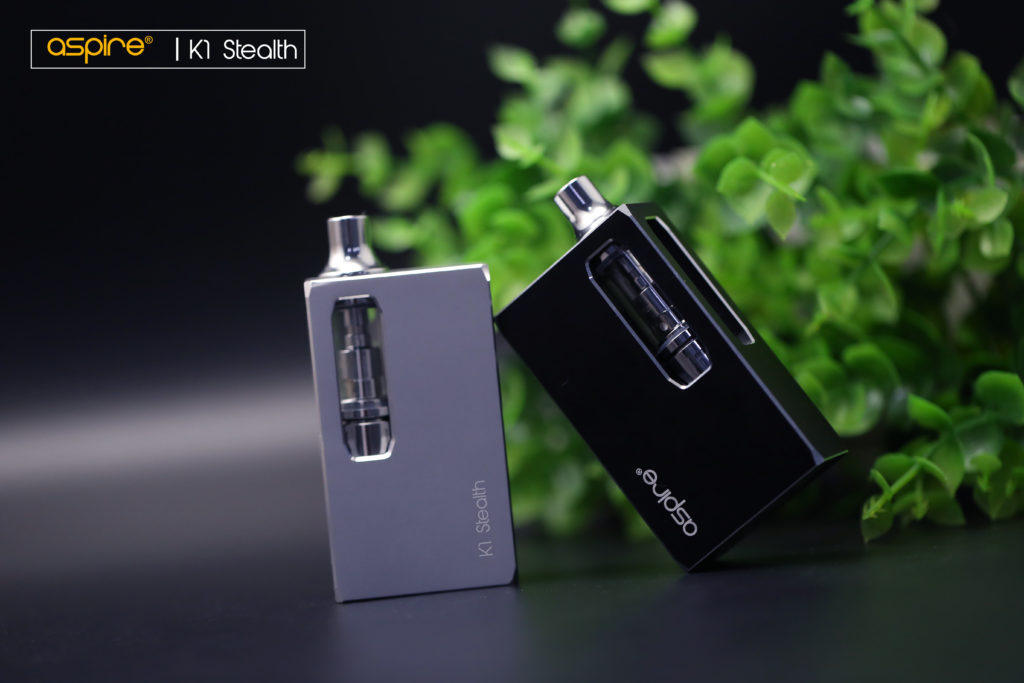 The mod is simplicity itself to use. The usual ‘five clicks on & five clicks off’ system using the fire button, It has a built-in 100mAh battery and charges through a mini USB port. Below the fire button and near the usb port is the indicator light, very small and very stealthy, not much bigger than a pin-prick glows green when fully charged at 3.8 volts or higher, blue when the charge is 3.8-3.5 volts, and red when 3.5 volts or less. On the base of the mod there is a ‘mode’ button to adjust the wattage, but more on that later. 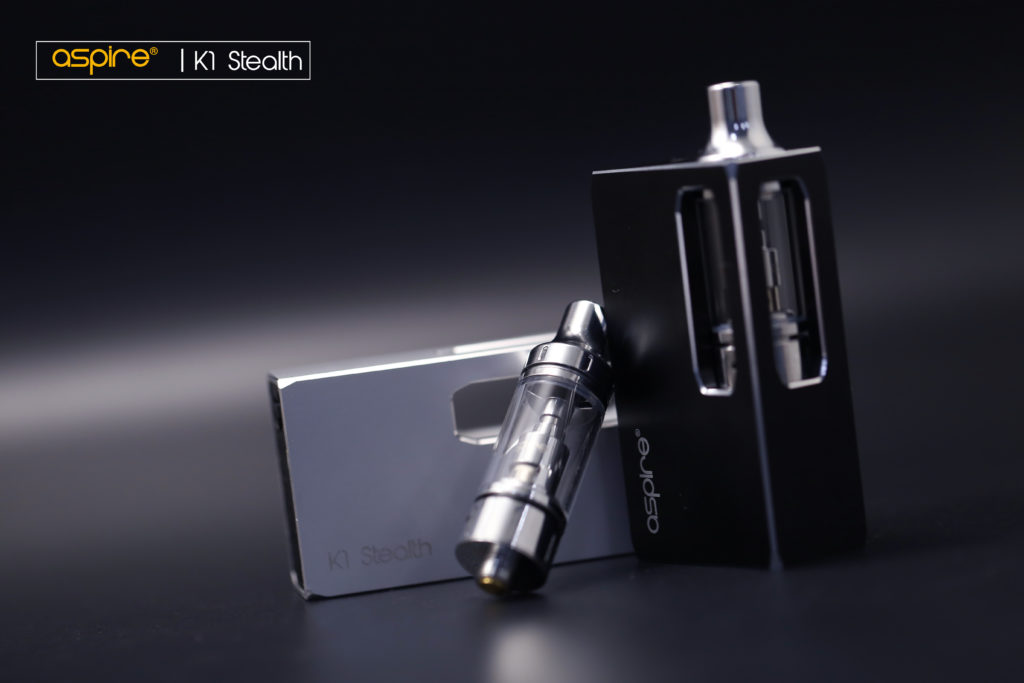 Whether the standard version, or the TPD version, both are a piece of cake to fill. Both are top fill and so simple, just three steps. First, unscrew the drip tip and remove it from the tank, then add your preferred e-liquid by pushing the tip of your filling bottle through the filling hole. Finally, put the drip tip back on top of the tank and screw down to secure it. Three simple steps and it’s done! For the TPD version it’s exactly the same other than you need to push down on the drip tip when unscrewing or screwing back on, similar to a child proof medicine bottle. The TPD version also has a self-sealing silicon fill port.

Easy to change the coils

What about the child resistant TPD version? That is just the same, but you remember I told you about the ‘push down’ stage in filling the ASPIRE K1 Plus tank? Where you need to push and turn at the same time to disengage the drip tip? Well exactly the same applies to the process of changing the coil in  the TPD version, Push down and unscrew from the base hardware, then push down and turn to replace the base hardware after changing the coil. Still simple!

Aspire is well known for the smooth airflow in it products and the ASPIRE K1 Plus tank is no exception. With airflow slots on each side of the base of the tank coupled with the BVC coil it makes for a very smooth airflow experience indeed from closing it right down for a great MTL type draw to a wide open more DTL vape, I don’t think even the fussiest person would be disappointed, I certainly wasn’t and I tried all the settings. It’s easy to adjust when the tank is off the mod. Off the mod?? Yes, this tank it attached to the mod magnetically with a small ‘screw on’ magnet attached to the mod. It’s held very securely and firmly, but not difficult to detach. Just a word of warning though, don’t drop the magnet into the mod without first screwing it on to the tank first. I can only imagine how difficult it would be to get back out as it’s quite a strong magnet!

Which brings us to the mod itself and the adjustable wattage.

Aspires ASPIRE K1 Stealth kit comes in two discrete, understated colors, Silver and Black, with well-placed cut-outs enabling you to see, at a glance, the e-liquid level in the ASPIRE K1 plus tank. It really fits well in the hand, is substantial without being overly heavy and as I explained before, really easy to use. I think the best things about this mod though are the way the ASPIRE K1 Plus tank attaches to the mod and the adjustable wattage feature – to me these two features really make this ASPIRE K1 Stealth kit stand out above anything else in its class. The way the mod is designed really protects the ASPIRE K1 Plus tank from accidental breakage of the glass tube but this is by no means guaranteed to completely stop ALL breakages.

First, attaching and removing the tank from the mod. As I said before, in the box the kit comes in there is a separate circular magnet that screws on to the base of the mod. Then when the tank is slipped into the body of the mod it is drawn in to the mod, and held there quite firmly. Always remember though to fill the tank and let it stand for a few minutes to let the coil saturate full with e-liquid prior to attaching to the tank, you don’t want to accidentally fire the mod with a dry coil and burn out before you get a chance to use it, do you? You’ll also notice the three cut outs in the main body of the mod, these serve two purposes, and the first is to allow you to easily see the e-liquid level within your tank, almost ensuring that you never get a dry hit. The other purpose is to allow you to grip the tank when removing it from the mod, as I said, it’s quite firmly held by the tank. 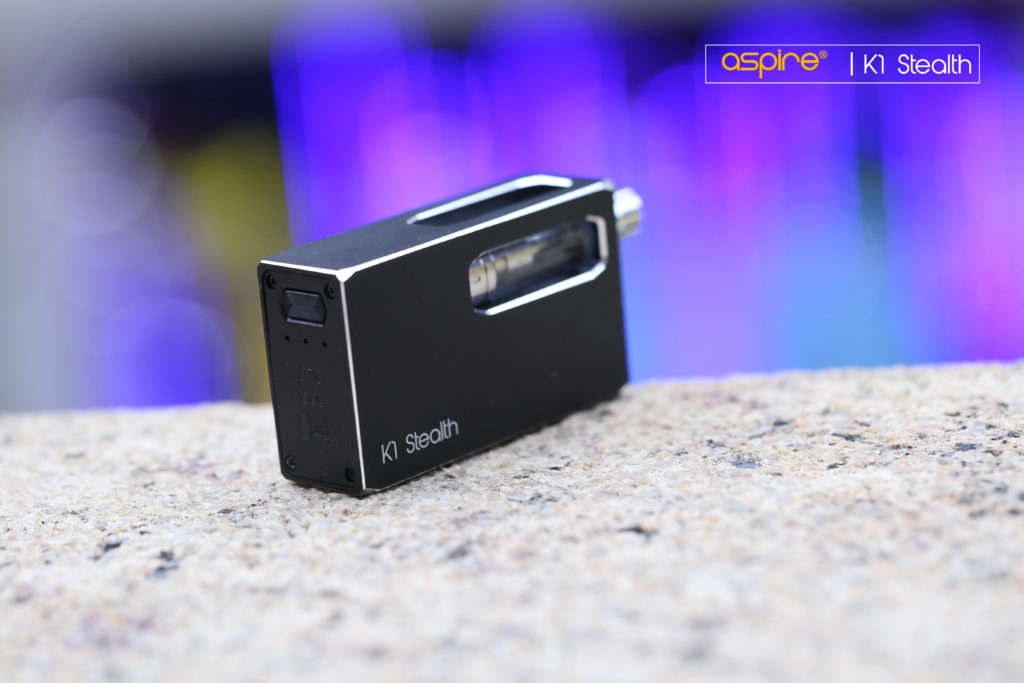 How does it vape?

So to cut to the chase, how does it vape? It has a performance that is second to none for this style of kit, the flavor and vapor production is great, whether its fully open or reduced to a quite tight MTL, its always smooth and satisfying with the all the flavor you’d expect from a modern Aspire product.

Aspire have included both a ‘standard’ BVC and also a ‘Nic salt’ BVC coil in the kit. The Aspire K1 plus tank has replaceable 1.8ohm coils and is also compatible with Aspire original BVC coils and Spryte coils. Adjusting the wattage is easy, though once set it stays put, I personally prefer a warmer vape so mine was set on 12 watts all the time. For those of you that like a cooler vape I suggest you try 8 or 10 watts.

The battery is 1000 mAh and lasted me a full day on a single charge under normal use, even at 12 watts.

Don’t just take my word for it, the Aspire K1 Stealth kit is a sure fire winner, and very stealthy!