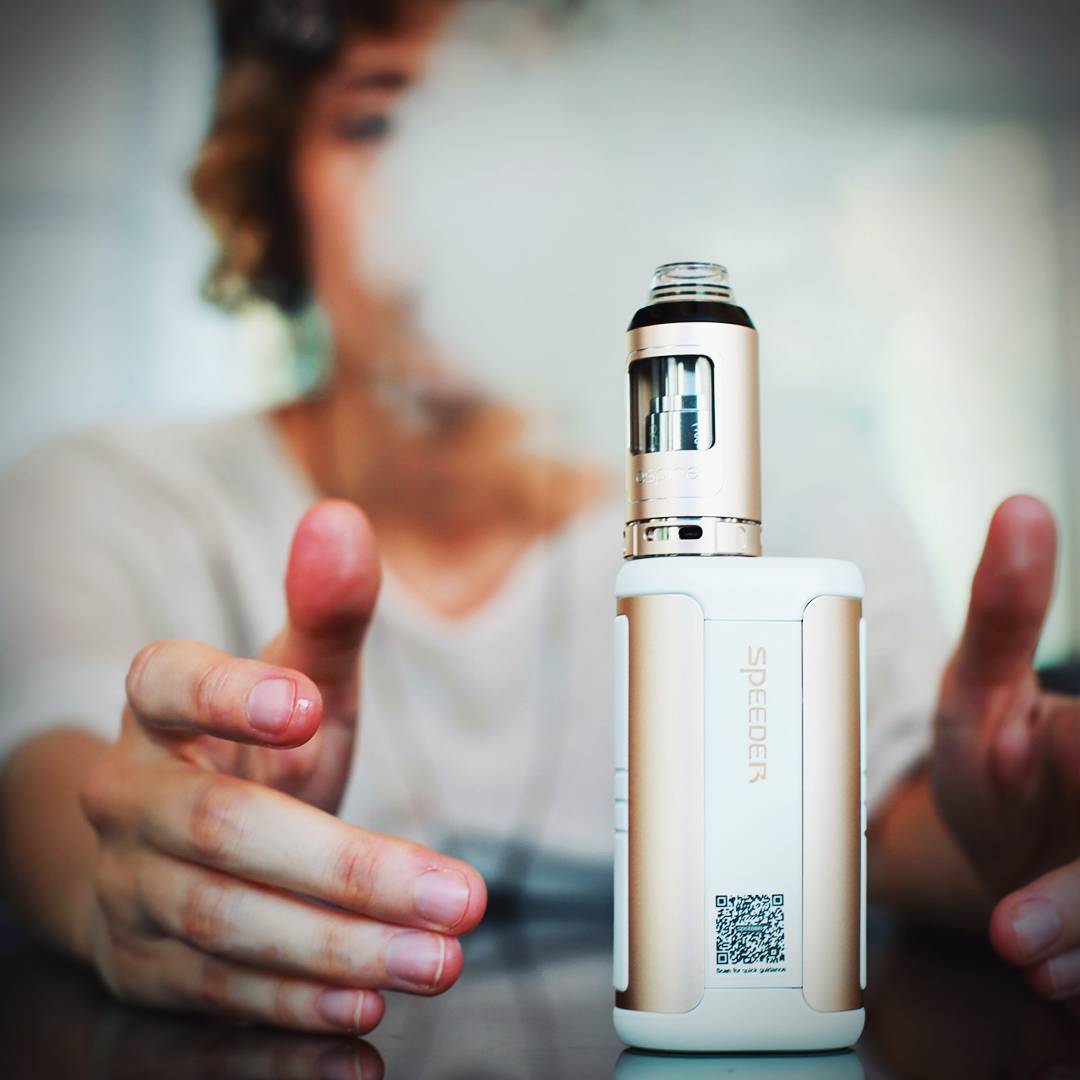 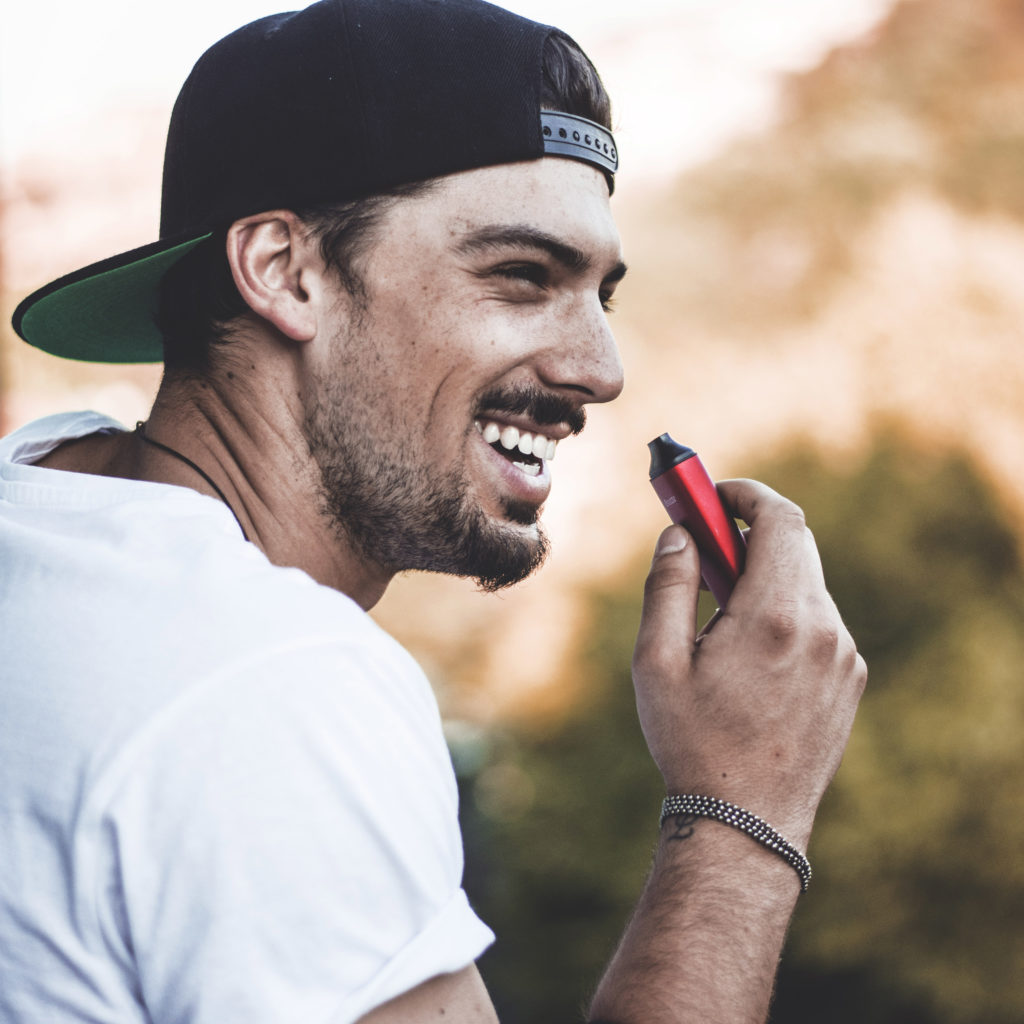 One of my favorite ways to relax is to sit having a vape and a nice coffee outside my local coffee shop.  For the last few weeks it’s been on my new Speeder Kit (Mod and Athos tank).  The owner and staff know me well and often ask “what flavor you got today?” They understand that my ‘vape’ is merely water vapor and as harmless to them as the steam coming from the ‘milk frother’ that they use dozens of times a day.

However, it’s not always lovely and relaxing when I’m outside that little coffee shop.  At times there are people who, it seems, have never seen anyone vape, or have no knowledge of the e-cigarette culture, how it works, why a lot of people use it, and how it does (or actually doesn’t) affect them personally, health wise.  They just see the ‘clouds’ of vapor and just assume that it’s SMOKE!

Now not so long ago, it wasn’t too bad with these people, as I never used to use such a powerful mod and tank.  The vapor, while nice and flavorful, wasn’t as voluminous or thick as my new Speeder kit. They might tut, shake their heads and look at me with distain and would never take the time to listen to what I was trying to explain and how much ‘safer’ vaping  is than cigarette smoking.  Now, it’s much more difficult with my even more powerful mod.  I can’t seem to make them realize or understand that VAPING IS NOT SMOKING!

I want to use this blog to try to explain a few things, hopefully those who do vape and read this, can pass it on to show others how and why vaping is not smoking and that for the people that ‘tut’ when they see a cloud of vapor they can perhaps understand what ‘vaping’ is all about. 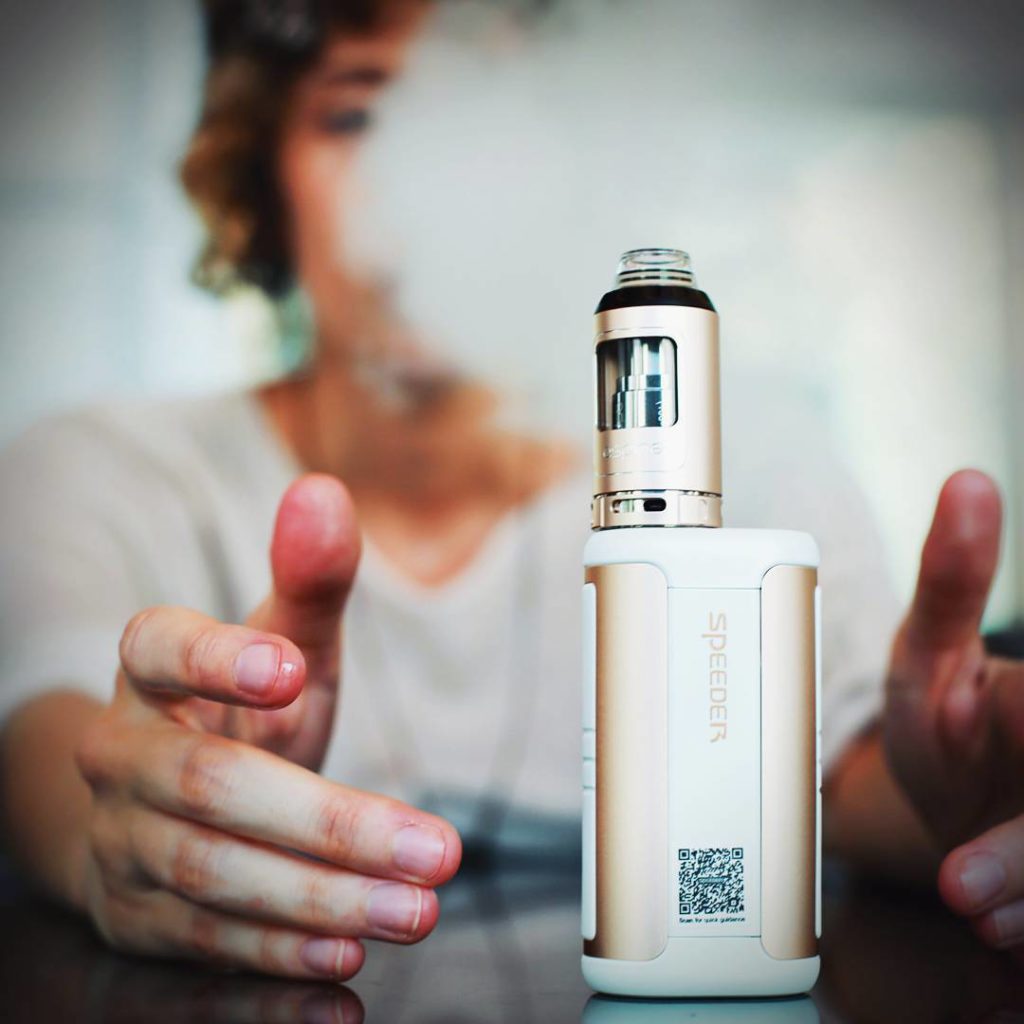 In the United Kingdom there is some consensus that smokers should be encouraged to use e-cigarettes if they feel they might help, and the National Centre for Smoking Cessation and Training is supportive of their use.

Part of the reason many vapers feel so passionately about the subject (and react strongly when they feel that vaping is being unfairly attacked) is that for the first time, through the use of e-cigarettes, they have felt able to take control of their nicotine habit, stop smoking, and reassert some control over their health, without being medicalized in the process.

Of course, nothing is entirely risk-free, but the vastly reduced number of chemicals present in e-cigarette vapor compared to tobacco smoke means we can be confident that vaping will be much, much less harmful than smoking. This suggests tobacco smokers may be able to reduce immediate tobacco-related harm by switching from conventional cigarettes to e-cigarettes.

Many people find it difficult to function without their first caffeine hit of the day. However no one is seriously calling for coffee shops to be dismantled or regulated, especially the very people who ‘tut’ when I vape outside my local coffee shop.

Yes we all know nicotine is addictive, but much less, so on its own than in tobacco, where other chemicals enhance its effect. At the doses consumed by vapers the harm is likely to be very low and many vapers actually gradually move to zero nicotine content e-liquids, even while continuing to vape, I myself have found that over time I use lower and lower amounts of nicotine. 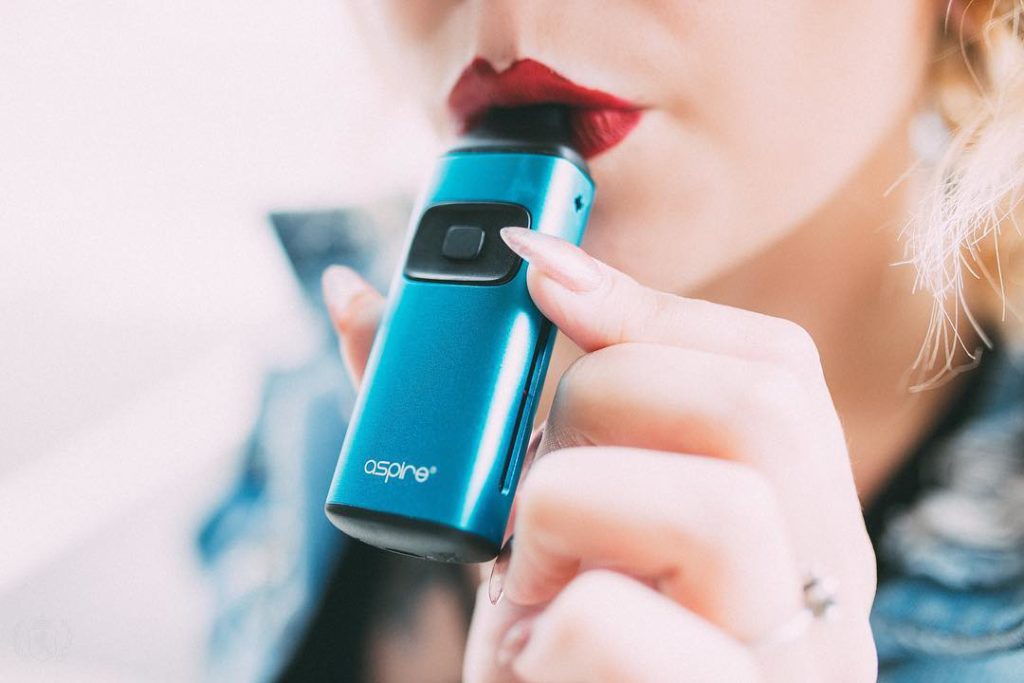 So why is vaping NOT smoking? Let’s look at some definitions and you can decide for yourself.

Medical definition of smoke(v): to inhale and exhale the fumes of burning plant material and especially tobacco.

Medical definition of vaporize(v): to convert from a liquid or solid into a vapor.

From their medical definitions alone, it’s pretty obvious that smoking and vaporizing are not the same thing. Electronic cigarettes were designed as a safer alternative to traditional tobacco smoking. Many look like real cigarettes and mimic the same rituals including the inhalation and exhalation of a smoke-like aerosol vapor. However, there are some key differences that distinguish vaping from smoking.

E-cigarettes do not involve the use of fire, but rather a heated coil.

Unlike tobacco, combustion is not involved in the vaporizing of e-liquid.

Vapor does not leave a stinky smell on fabrics or skin.

E-cig vapor has a completely different chemical composition than cigarette    smoke and contains far fewer toxins at much lower levels.

No smoke without Fire

In order to smoke a cigarette, one must light the end of a tobacco filled, pre-rolled paper tube with a flame. Tobacco may also be smoked by being packed into the bowl of a pipe and lit with a lighter. Electronic cigarettes, on the other hand, do not require a lighter or flame in order to be operated. They simply involve a liquid solution heated into a vapor using a battery-powered atomizer.

Because electronic cigarettes don’t involve the use of a flame during operation, they produce a much lower heat than a lit cigarette and therefore don’t involve combustion. An atomizer coil made from resistance wire is fed a current from a battery causing it to heat up to a temperature hot enough to vaporize a flavored e-liquid. Yes, the coil may glow on a dry wick but in the presence of liquid it only heats up.

Smoking alternatively uses a flame to combust pieces of tobacco leaves along with thousands of added chemicals into smoke. Temperatures of a lit cigarette coal climb up to around 1,200 degrees Fahrenheit, much hotter than those of e-cigs. It is possible for tobacco leaves to be vaporized but the vapor would still contain about 5 percent smoke. In the absence of combustion of the over 7000 chemicals in cigarette smoke, e-cig vapor will also not leave an odor behind on fabrics or skin.

There are two ways second hand smoke is spread to bystanders and people around you. The first is the more obvious exhalation of smoke by the user after taking a puff from a cigarette. Referred to as mainstream smoke, it is usually passed through a filter in the cigarette butt to remove some of the tar produced during combustion before it is inhaled and exhaled into the surrounding air. Secondhand smoke is actually more dangerous as it is unfiltered and is usually more prevalent, especially in smokers who take longer breaks between puffs.

Electronic cigarettes contain no secondhand vapor, as there is no lit end of an e-cig and the user inhales nearly all of the vaporized liquid.

Electronic cigarette liquid typically only contains propylene glycol, vegetable glycerin, flavoring, and optional nicotine. Flavorings can include malic acid (fruit/sour), acetylpyrazine (chocolate), vanillin and menthol. Vapor from liquid containing nicotine can also contain trace amounts of tobacco specific nitrosamines, albeit at levels below limits of detection and up to 1,400 times lower than in cigarette smoke.

Because e-cigarettes don’t involve the use of a flame or combustion, vaping can’t be considered the same as smoking. Furthermore, electronic cigarettes don’t produce any secondhand smoke or vapor and operate using far less heat than the lit end of a cigarette. E-cig vapor does still contain a few of the VOCs and TSNAs found in cigarette smoke, but at far lesser levels. However, its appearance will understandably lead many people to believe that it is no different than smoke, just as the marine mist layer creeping onto coastal communities at night has a similar appearance to that of smoke from a burning brushfire.

Article by Peter from Aspire Team. 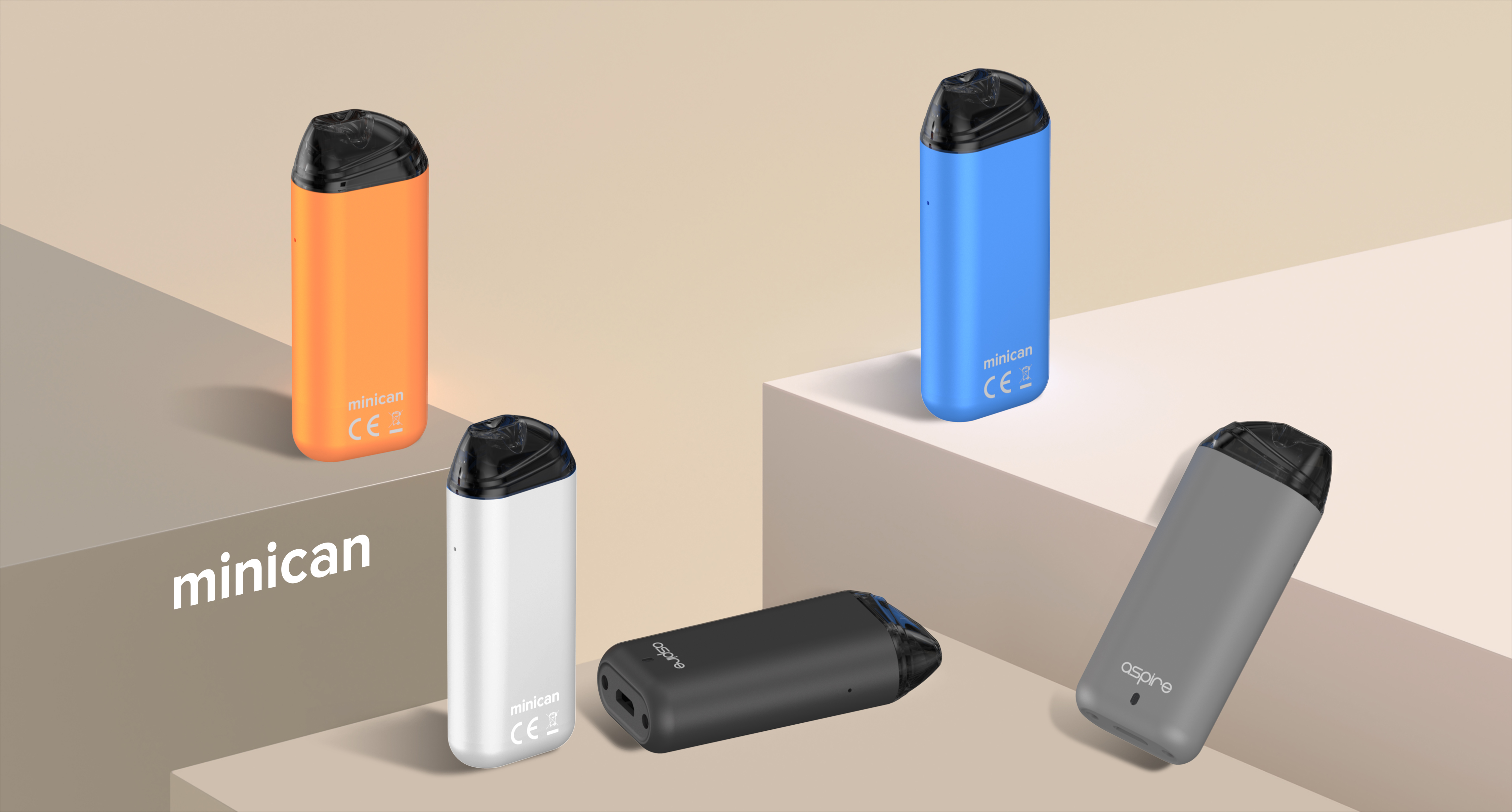 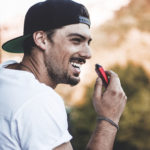 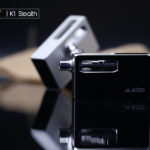 How to Stealth Vape with Aspire Vapes 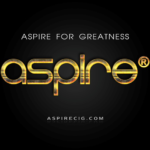