Effects of Vaping on Lungs (Is It True or Is It Just Fake News?) 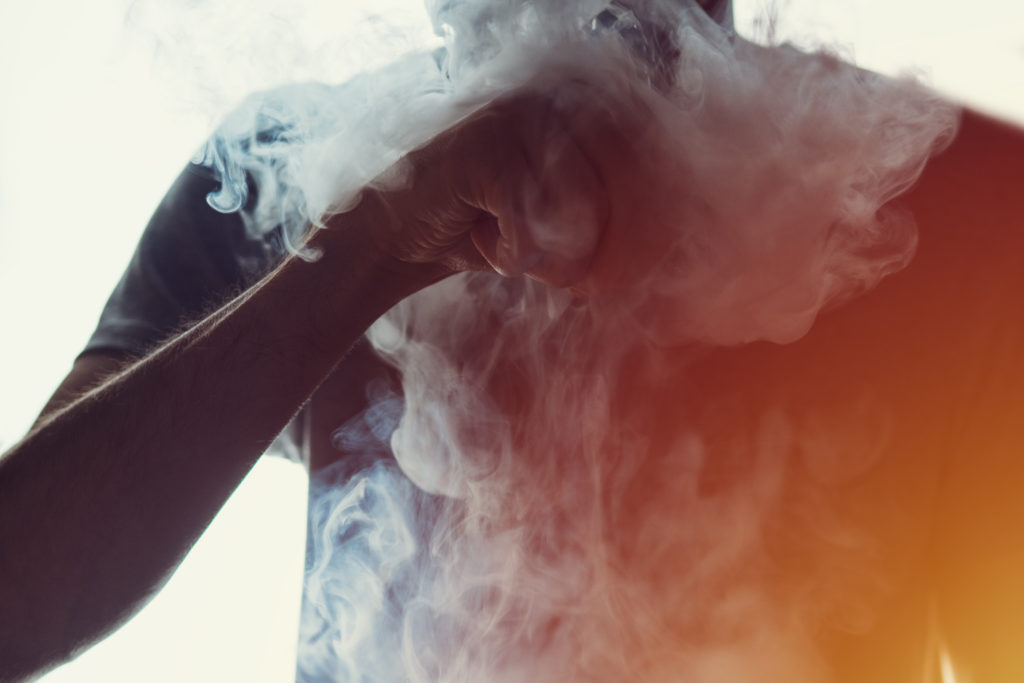 We all know how bad smoking is and we all have read many news about the effects of vaping on lungs. Additionally, we have heard many times about smoking being the primary cause of lung cancer and coronary disease. However, smoking doesn’t kill you right away, but it is a gradual impact on your health. On the other hand, the effects of vaping on lungs are very controversial.

You probably would never smoke cigarettes impregnated with cyanide. Would you? You know that cyanide is a lethal poison and that it probably would kill you immediately.

If that was the case, the next day news reports headlines would be something like: ‘Deadly cigarettes: smoking kills hundreds in seconds’, ‘Health authorities concerned about new cases of tobacco smoking and sudden death’, ‘Smoking: new deaths caused by cigarettes’ and a long etcetera.

Most likely, you would think that these headlines are misleading, since it wasn’t tobacco smoking that killed them all of a sudden. However, the cyanide present in some cigarettes is to blame (in this hypothetical case).

Vaping has been experiencing this kind of news for the last weeks. News that, in my opinion, are misleading and pure sensationalism.

And, you know what? Most of readers share news just reading the headlines! Isn’t it confusing and an easy way to spread fake news?

In this article, I’d like to clarify the causes of these sudden pulmonary health issues attributed to vaping.

The problem: Effects of vaping in lungs and new lung disease

Apparently, more than 200 people got sick after vaping in the United States. The affected people come from different States and the authorities don’t know what exactly caused the pulmonary issues.

CDC (Center of Disease Control and Prevention) conducted a new research and many users reported nausea, diarrhea, chest pain, shortness of breath or chest pain. The major issue here was the death of a man from Illinois that was hospitalized with a severe pulmonary condition that led, subsequently, to his dead.

This case was reported by many news as the first death caused by vaping. Subsequently, news started to alarm readers about the effects of vaping on lungs with biased and misleading headlines. In addition, this news has been a trending topic for the last couple of weeks.

In addition, the CDC also states that “no single substance or e-cigarette product has been consistently associated with illness”. In other words, the CDC doesn’t know the exact cause of this pulmonary conditions but suspect that it was cause by adulterated e-juices bought in the black-market.

The disease: lung condition after vaping

This pulmonary disease is very serious, and it should be researched to determine the cause of this rare and potentially fatal condition.

In my opinion, the effects of vaping on lungs need more research to determine its long-term effects on users. However, this pulmonary condition is an acute reaction to some poisonous substance present in e-liquids with no quality approvals. In other words, we aren’t talking about a chronic condition caused by daily inhalation of vapor.

The cause: Black-market e-juices

The CDC also recommends users not to buy e-juices off the streets. Regardless of the ongoing investigations, the CDC recommends buying only certified products that have passed quality standards.

As a preventive measure, they recommend staying away from black market e-juices. Moreover, the only thing we know just now is that the investigations are ongoing and hence, they haven’t drawn any clear conclusions yet.

In addition, they emphasize “staying away from black market e-juices” because many cases reported pulmonary problems after vaping THC oil that was bought in the black market.

Moreover, the effects of vaping on lungs are just mere speculations. As a matter of fact, we can’t speculate and alarm vapers with sensationalism and small doses of reality.

In the meantime, the CDC urges people to not use any vaping device even though there is insufficient data to blame e-cigarettes. Moreover, they recommend e-cigarette users to “monitor yourself for symptoms”.

Effects of vaping on lungs? The solution

The solution to this problem is simple: don’t buy e-liquids off the streets. This could be potentially dangerous and, moreover, you don’t know what you are vaping!

In addition, we should wait a few weeks-or perhaps months-to know the real cause of this pulmonary condition. For the moment, the heath authorities haven’t drawn any conclusions about this serious respiratory disease.

Aldehydes: effect of vaping on lungs

There are many aldehydes, and the most common used one is formaldehyde. Formaldehyde is mainly used to produce industrial resins. For instance, bakelite, which is the first synthetic plastic ever made, is formed by a condensation reaction of phenol and formaldehyde.

Moreover, formaldehyde is also used in small concentrations in cosmetics, lotions shampoos and other common products. In other words, we are daily exposed to formaldehyde.

In addition, formaldehyde isn’t classified as a carcinogenic by all agencies but as a “probable human carcinogen” by the EPA (Environmental Protection Agency) and by the National Cancer Institute. On the other hand, the International Agency for Research on Cancer (IARC) concludes that formaldehyde is carcinogenic to humans.

To sum up, there’s no consensus whether aldehyde is a carcinogenic to humans or not.

Formaldehyde: effects of vaping on lungs

Recently, more news has started to emerge about aldehydes (acrolein and formaldehyde) present in the vaping process. Firstly, it’s important to emphasize that aldehydes are present in much higher levels in cigarettes and cigars. In other words, we can’t say that the aforementioned acute respiratory conditions were caused by exposure to aldehydes as it would take years of vaping for someone to experience any serious health issues.

Apparently, levels of aldehyde (as formaldehyde) are higher in vaping if the vaper gets a dry hit. To sum up, it’s very unlikely that you will vape high levels of formaldehyde as you will notice a dry hit immediately.

In conclusion, the effects of vaping on lungs aren’t comparable to the harmful effects caused by smoking. As a matter of fact, the levels of formaldehyde are much lower unless you enjoy vaping dry hits (and I think you don’t as nobody enjoys the acrid taste of acrolein).

Dry hits and effects of vaping on lungs

The effects of vaping on lungs caused by dry hits are minimal. Why? Because you won’t inhale enough levels of formaldehyde with just one or two dry hits. However, we will give you some advice to avoid dry hits.

Firstly, your coil must always be wet. In other words, if your coil is wet, then you will never get a dry hit.

Secondly, take slower drags and let your device rest a bit after each puff.

With these two simple advices you can easily avoid dry hits. To sum up, the effects of vaping on lungs will not have any impact on your health.

Effects of vaping on lungs: conclusion

Secondly, some doctors claim that formaldehyde was the cause of this sudden and acute lung symptoms. However, formaldehyde is present in shampoos, nail polish removers and a long list of different products. Moreover, it’s not clear that formaldehyde is carcinogenic to humans (there isn’t a scientific consensus about it).

As a matter of fact, formaldehyde is required for cell growth! In addition, the threshold limits range from 0.1 to 0.4 ppm for indoor air in countries like Denmark, Netherlands or Sweden, which are higher levels than 5 consecutive puffs on a vaping device.

According to some experiments, if you puff 5 consecutive times on your vaping device, then you will get 0.045 ppm of formaldehyde. In other words, levels of formaldehyde much lower than the threshold limits for indoor air.

In conclusion, the negative effects of vaping on lungs, was most likely caused by black market THC e-juices that contained some substance that is harmful for human consumption. Nonetheless, reporters and news all over the world have drawn conclusions blaming vaping with no scientific data whatsoever.

In my opinion, this fake news and pseudo-scientific data is dangerous, not only for the vaping industry but for the society as a whole. In addition, I think we definitely need more research about vaping and long-term effects. So far, we don’t have any conclusive data about its long-term effects. Furthermore, we can’t state that vaping irritates lungs or causes serious respiratory diseases.

We recommend you do your own research, read more than just sensational headlines and decide by yourself!