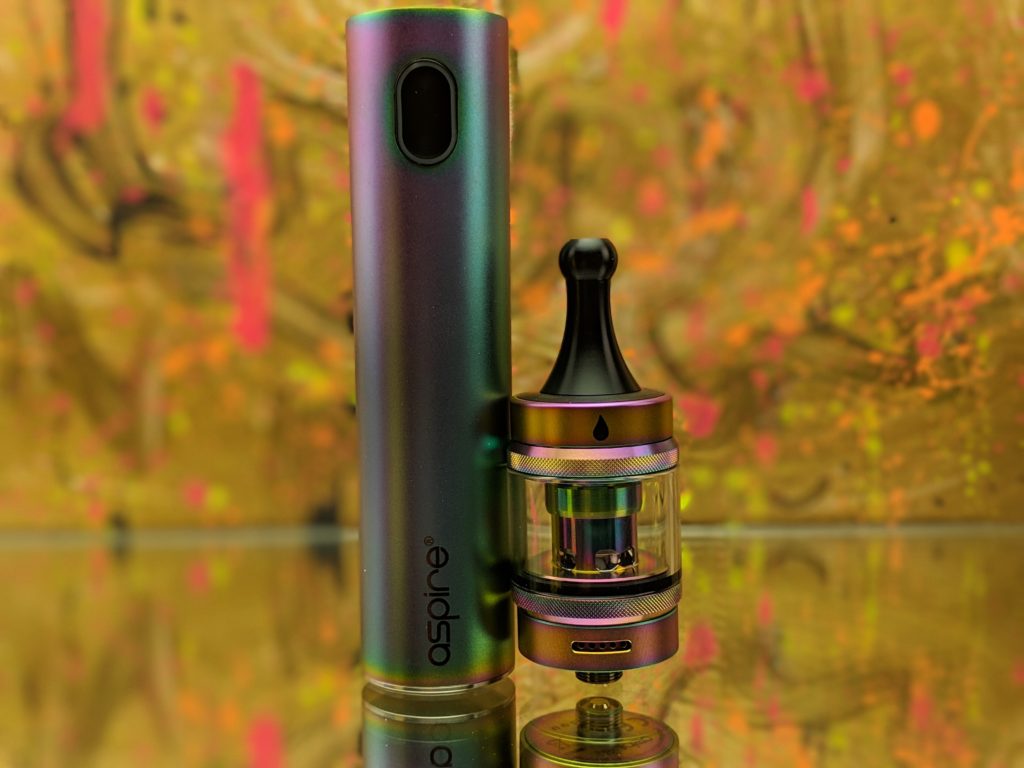 Aspire recently released a new ‘stick’ styled device called the Tigon. It’s named for the exotic hybrid cross between a male tiger and a female lion, the converse being the slightly more common Liger. This interesting new starter kit is definitely geared towards beginners but would still be a solid option for more advanced vapers looking for an easy to manage kit with some very handy features. Here are my honest thoughts on Aspire Tigon Kit.

The kit comes packed in a tall cardboard box with an outer sleeve bearing an image of the kit on the front. Inside, the kit is neatly packed and comes with the Tigon mod and tank, a spare glass tube, a DTL 510 drip tip, a MTL 510 drip tip, two different coils one rated at 0.4ohm(23-28w) for direct lung and one rated at 1.2ohm(12-12w) for mouth to lung, a packet of spare o-rings, a warranty card, user manual and a micro USB cable for charging. It’s a well-stocked kit that should provide a great starting experience for nearly anyone making the switch to vaping.

The mod that comes with the kit is simple and intuitive. I believe it’s mostly made of aluminum so it’s fairly lightweight and comfortable to hold. It stands 142mm tall with a diameter of 23mm and has an internal battery with a capacity of 2600mAh. At the top of the device is the 510 threaded connection where you attach the tank. The threads are nice and smooth and the spring loaded center pin appears to be gold plated with plenty of travel and the tank that comes with the kit matches up perfectly with the device. Just below the top is the oval-shaped fire button, it’s ringed with an LED light to indicate firing and charging as well as remaining battery life. On the side opposite the button is a micro USB port for charging. Aside from the button and USB port, it’s pretty non-descript but with the satiny finish they’ve given it I think it looks pretty slick. It is a bit on the tall side but there’s another version available that’s a bit slimmer and a bit shorter so if you prefer your gear to be a bit more compact you do have options.

It’s a direct output device or what Aspire calls ‘By-pass’ mode meaning it draws directly from the battery without any regulation. That means your experience can decline as the battery depletes but considering the coils they’ve included with the kit are quite low powered chances are you really won’t notice any significant drop off before the battery hits its low voltage cutoff. While I do tend to prefer regulated output devices Aspire did a good job matching the coils to the Tigon so it’s hardly an issue. Of course, it does have all of the usual safety features built in like automatic cutoff, short circuit protection, low voltage protection, overcharge and overheat protections so in nearly any case you should remain safe. To indicate remaining battery life that ring around the button changes colour after each time you fire the device. If it shines red the remaining charge is less than 3.5V, from 3.5-3.8V the light shines blue and when it’s fully charged or above 3.8V it shines pink. The device includes quick charging and can charge at a rate of 2A and when fully charged the light will flash 20 times and shut off to indicate it’s full.

While the mod that comes with the kit is fairly simple it looks like most of the innovations on this kit were packed into the tank. The Tigon tank stands about 52mm tall including the drip and 510 with a 24.5mm diameter. The base of the tank is actually 23mm to match the mod but bulges out slightly to the full 24.5mm around the glass tank. It’s not a bubble glass though it’s just that the glass section is wider than the base. At the very top, it comes equipped with a nice tapered 510 drip tip meant for direct lung vaping but the kit also includes a slightly taller and narrower tip aimed at mouth to lung vaping. It holds 3.5ml(2ml if TPD) of liquid and touts an interesting childproof top fill cap. To access the fill port you sort of lift up on the top cap and slide it open. There’s a little droplet painted on the side to indicate where to push to get it open. It works pretty well and is still easy enough to access for adults. Once opened there’s a medium-sized kidney shaped fill hole where you stick in your tip and fill it up.

However the innovations don’t stop there! When you open up the tank by unscrewing it from the base you’ll see Aspires new plug-in coil system. We’ve seen similar plug-in coil implementations on other tanks out there but Aspire takes it a step further by including a spring-loaded mechanism in the chimney which closes off the wick holes when you pull out the coil. What does that mean, it means when you just filled up your tank only to realize your coil is burnt you don’t have to empty it to replace the coil. Just open up the tank, pull out the old coil, pop in a new one, waiting for a few minutes and boom you’re ready to go again. With rebuildables, it’s a feature I really appreciate but this is one of the first tanks with replaceable coils that I’ve seen sporting a handy feature like this.

Not only does Aspire include two types of drip tips for the two major styles of vaping(mtl/dtl) but the airflow system on the tank further supports them by offering two different styles of airflow. To adjust the airflow you turn the air flow control ring located on the base of the tank. The outer ring has a single cyclops style slot which you can turn to expose either a wide open airflow slot or a series of five little holes. You can keep all five open or close them down one at a time for a tighter draw with a single little hole being the tightest. Aspire once again did a great job with the airflow and sealed the AFC ring with an o-ring so when you close it down to just a single hole you pretty much get the airflow of a single hole and not the leaky airflow we’ve seen on so many other “MTL” tanks out there.

As I’ve already alluded to using the device couldn’t get much simpler and the performance I’ve been getting from it has been spectacular. With the 0.4ohm direct lung coil, I get a restricted direct lung hit. For a direct lung coil, it is fairly tight but the flavour and vapour I get from it has been fantastic. Same goes for the mouth to lung coil, the flavour I get from it is incredible although the vapour production is much more subdued being it’s a mouth to lung coil. Matched up with the adjustable airflow I’ve been rocking it with two holes open for pretty much an ideal mouth to lung vape. As for longevity of the coils, it always depends on juices used, personal vaping habits and QC on the coils but I don’t see why you couldn’t get at least a week or two out of the coils before needing to be replaced.

Considering the performance of the coils and the battery life I got out of the mod I’ve been really enjoying my time with the Tigon. Over five years ago when I first made the switch I started with an Aspire kit so it’s really nice to see they’re still innovating and producing quality kits that both new and seasoned vapers alike can appreciate. I think the Tigon is a well put together kit with some really great options, not to mention the innovative features like the self-sealing wick holes, the childproof cap and plug-in coil system.

Note: This full Review was made by Chris MajorVapes Sisson, Thank you for the detailed Review